When Slaves and Currency Were One 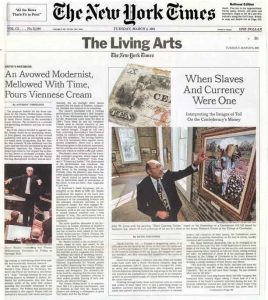 CHARLESTON, S.C. — Without a magnifying glass, it is difficult to see the faces on the slaves as they harvest cotton and hoist overflowing baskets to their shoulders. Minutely engraved on the tattered currency of the old South, the images are faded and smudged, and their message has languished in the vaults of collectors.

About four years ago, a collector took one of the old Confederate bank notes into a North Charleston blueprint shop and asked an employee, John W. Jones, to have it enlarged. Mr. Jones, an artist and commercial illustrator who frequently paints African-American themes, studied the engraving on the note and was struck by the Confederacy’s decision to use as its monetary symbol an accomplished image of a black field hand straining at the cotton harvest.

Prowling through hobby shops and Internet sites, he realized that scenes of slave labor were in fact a prevailing image on Southern currency during the mid-19th century. Where other states and nations used historical scenes or pictures of national leaders and resources on their money, the Confederate states often chose to portray themselves as the land of slaves, usually contented and sometimes smiling.

But these historical documents had to be enlarged to be appreciated. Because very few visual depictions of slavery were made at the time, Mr. Jones got out his acrylics and canvas and began painting these vignettes as full-size works, adding nothing but color. An exhibition of about 30 of his paintings opened in February at the College of Charleston in its Avery Research Center for African-American History and Culture, and it has been drawing a steady audience of both blacks and whites.

“We built the economy of the South, and here you have the banks saying so,” said Mr. Jones, who now works in a studio in Columbia. “But no one had seen these images. No one realized what was on the bills.”

Numismatists have long known about the bills’ imagery, but historians have recently begun taking a closer look at it as a statement of the South’s economic priorities during the war. An Internet exhibition created last year by the United States Civil War Center at Louisiana State University has more than 75 engravings of slavery from Confederate paper money. (The exhibition can be seen at www.cwc.lsu.edu /BeyondFaceValue.)

At the time, money was printed both by the Confederate States of America and by the banks of the individual Southern states. Several scholars who contributed to the online project noted that Southern banks enshrined slavery in their monetary system to remind those who came in contact with their bills that the institution was the region’s economic bedrock.

“Slaves were the capital of the South,” said Henry N. McCarl, an economics professor at the University of Alabama at Birmingham and a numismatist who contributed an essay and part of his collection to the online exhibition. “Cultures put on their money objects that are important to them and their economy, and the South had an interest in showing to the world that the slaves were well treated and happy.”

There are, of course, no scenes of slaves being mistreated on the bills, and in a few close-ups they are smiling as they move in ragged clothes and bare feet through the cotton fields. In one scene painted by Mr. Jones from a South Carolina $5 bill, a white overseer supervises a group of slaves from his horse with his whip in his hand; in another, a white man and woman gaze down at a quartet of bent-over slaves working with scythes in a wheat field.

The pictures, like the Confederacy itself, are almost entirely agrarian and usually romanticized, etched by engravers who are not now identifiable. Slaves are shown loading sugar cane onto wagons and leading cattle and very frequently working with cotton: planting it, picking it, hauling it, baling it. The cotton images are repeated so often they become iconographic, and some of the bills show classical goddesses of liberty or prosperity — even George Washington — gazing at the cotton scenes with admiration and blessing. In one allegorical picture painted by Mr. Jones from a Georgia Savings Bank bill, a white figure that is apparently that of Moneta, the Roman goddess of money, is in the foreground holding a cotton plant as bags of gold spill open at her feet. In the background, an overseer on a horse supervises a field of slaves as a train arrives to pick up their harvest.

“I was particularly intrigued by that one,” said Mr. Jones, most of whose paintings in the series have been snapped up by collectors. “The slaves are doing the work, and she’s got the money.”

John M. Coski, historian and library director at the Museum of the Confederacy in Richmond, Va., said that there were more vignettes from classical mythology than of slaves on Southern currency, and that the banks were not so much making a grand statement about slavery as they were simply depicting their world. But several African-American scholars disagree about the statement being made by the money.

“We did this exhibit because of what John showed us about the South,” said W. Marvin Dulaney, director of the Avery Research Center and a history professor at the College of Charleston. “We hear a lot these days about how the Confederacy was really about states’ rights and not slavery. But the currency itself tells the truth. It shows how they saw us, and how they wanted to keep seeing us.”

Enter Your NAME + Email
To Stay In The Loop