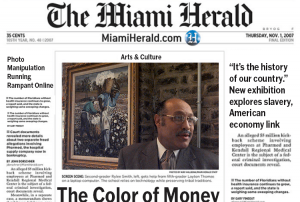 A painting of the Roman goddess Moneta hangs on the wall of the African-American Research Library and Cultural Center in Fort Lauderdale. The image shows the fair-skinned woman holding a cotton stalk with one hand, a sack nearly overflowing with gold coins in the other, as enslaved people pick cotton in the background. Originally depicted on Georgia’s $5 bill in the 19th century, the scene is one of the favorites of artist John Jones, who recreated it some years ago. “It shows just how important the cotton was to the economic development of the South,” Jones recalled, “because she’s got the money and we’re doing the working.”

The painting is part of a new exhibition entitled “Confederate Currency: The Color of Money,” now on display in the library at 2650 Sistrunk Blvd. Featuring 40 of Jones’ 300 pieces, the collection — on display through Jan. 8 — illustrates the role of American slavery as the foundation for the world’s most powerful economy. More than that, the works hopefully will spark a conversation about equity, says Dwayne Rayner, the executive director of Partners in Racial Justice, which partnered with the library to bring the exhibit to Fort Lauderdale.

Visitors should leave with “a desire to learn more about what things are out there that haven’t been shared about our history and use that as a platform and foundation to think about what we could do today differently,” explained Rayner.

Born and raised in Fort Lauderdale, Rayner recalled his ninth grade history lessons on slavery as somewhat incomplete. One of his textbooks featured an image of “happy enslaved people in the fields with the white person looking over them” that will forever be etched in his memory. “That’s what a whole generation of people grow up viewing as the history of slavery in this country,” Rayner said, referring to the textbook. “It’s definitely a miseducation.” Similarly, Jones did not learn about Confederate currency in school. It wasn’t until a customer asked Jones, who worked at a print shop in his native South Carolina in the 1990s, to enlarge a Confederate bill that the artist found his muse. The very sight of enslaved people, many of whom flashed toothy grins, on the banknotes drove him to dig for additional pictures of Southern states’ money. He would find more than 300 bills with similarly imagery. Jones knew he had to show the world.

“What I try to do with these paintings is give the African Americans on these notes a sense of dignity because these images were put on this money as propaganda,” Jones said. He added: “The South keeps proclaiming the Civil War was not fought over slavery but states’ rights. Well, the only rights I see is the right for them to keep and own slaves: It was obvious that was important to them because, after all, it was on their money.”

Jones’ work has since traveled throughout the country, even briefly being displayed in the Broward County Main Library in 2004. What makes this exhibition a bit different, however, is the curation. “It’s a multilayered experience,” said Makiba Foster, the library’s regional manager.

Cotton and tobacco plants line the floor. A video that includes explanation of Jones’ paintings, news clips about the significance of Confederate images and audio from an interview with a former enslaved person plays on the back wall. That, coupled with the visual representation of cash crops and the written descriptions of enslaved people’s experience, impresses upon visitors the horrors of bondage. “We just really wanted to put you in that space if you had to [pick cotton] all day long, would you be actually smiling and would you want to do that for the rest of your natural life,” Foster said. To accompany the exhibit, Partners in Racial Justice will also host several events to encourage the very conversations that Rayner hopes to ignite. These virtual events include seminars aimed at increasing entrepreneurship among Black youth and weekly discussions about how to create a more equitable society. “This is the moment for this dialogue,” said David Hoffman, who sits on the Partners in Racial Justice board. “More and more people want to know the truth.”

How long this moment will last is unclear. At a time when George Floyd’s murder opened the eyes of many to the plight of Black Americans, the exhibition reminds visitors about the importance of resiliency. And as the teaching of race and slavery’s lasting effects increasingly become a political flashpoint, Foster believes the paintings can unify. Jones’ work shows “a depiction of Black people but in some instances, it’s not only [Black] history,” Foster said. “It’s the history of our country.”

Enter Your NAME + Email
To Stay In The Loop